Situated strategically on a sprawling hill, Kek Lok Si is known as the jewel in the crown of heritage temples in Malaysia, and has been identified as one of the largest and finest temple complexes in Southeast Asia.

The scenic view of the hills outside the temple complements the temple’s exquisitely designed rooflines and exotic pullars, further enhancing the picturesque facade of the Kek Lok Si Buddhist Monastery.

The millions of of magnificent images of Buddha and the hundreds of beautiful meaningful carvings, sculptures and murals in the interior and exterior of the temple halls, pagodas and archways are heritage treasures of Buddhist civilization. The temple complex also features many magnificent buildings and interesting sites that have historic value. The buildings have been constructed along intricate architectural lines; sine resemble famous Buddhist temples in China, whilst others are unique in themselves, reflecting the Kek Lok Si’s own style of creative innovation. 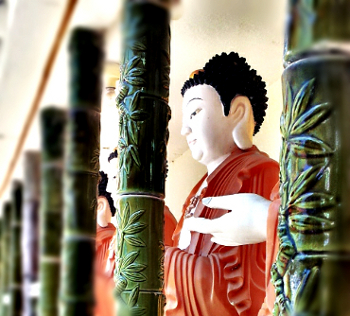 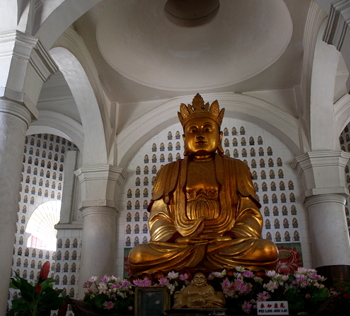 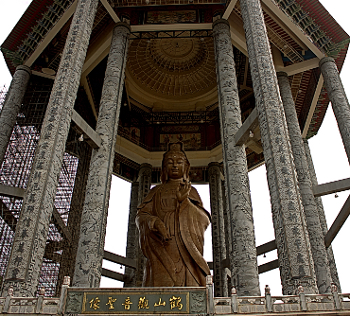 The history of Kek Lok Si can be traced to the late nineteenth century. It began with the arrival of a priest, Venerable Beow Lean in Penang in 1885, who came to Penang with the aim of obtaining donations for the renovation of a monastery in Ku-san, Foochow, China. Instead, the trustees of the Kuan Yin Teng (Kong Hock Keong) Temple in Pitt Street, the oldest temple in Penang, decided to appoint him as the new resident priest of the temple.Venerable Beow Lean accepted the post as he was struck by the deep devotion of the Penang Chinese to Buddhism. Later, he discovered that a sprawling hill, in Air Itam village, outside of George Town, has the right feng-sui to build a Buddhist monastery. Naming the hill Huock-san(Crane Hill) because it resembled a crane spreading its wings, Venerable Beow Lean decided to build a temple, to be known as “Huock San Kek Lok Jan Si”, which would act as a retreat center for Buddhists.

With the blessing of his superiors and the support of some generous contributors, the Kek Lok Si temple began to take shape. The earliest building completed was the Hall of Bodhisattvas in 1891; followed by the Hall of Devas in 1895, the Hall of Devawira in 1896, the Tower of Sacred Books in 1899. In 1904, when the first phase of temple complex was completed, Venerable Beow Lean returned to China and paid homage to the Ching Emperor, Kuang Xi, who later presented him with a set of Buddhist sutras, the emperor’s hand written scripts and several other relics. The well-known Empress Cixi, of the Ching Dynasty, also wrote and presented handwritten scripts to the temple. Until today, all these heritage relics are still kept in the temple; the royal scripts were converted into plaques, and the writings were displayed at the Hall of Devawira and the archway of the Pagoda of A Million Buddhas. 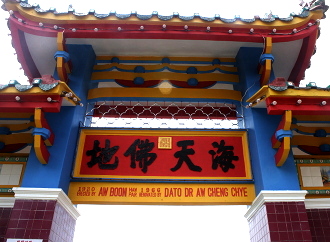 In 1905, Venerable Beow Lean was ceremoniously installed as the first Abbot and Chief Priest of the Kek Lok Si. He served the temple for more than 15 years (1891 to 1906). Venerable Poon Teong succeeded Venerable Beow Lean and build some of the temple’s finest buildings, such as The Pagoda of A Million Buddhas. The building of the Pagoda started in 1915 and was completed in 1930. The Pagoda is about 100 feet high and its innovative design is a combination of Chinese, Thai and Burmese architecture. This Pagoda, also known as the Kek Lok Si Pagoda, is the most famous landmark in Penang. Beside the Pagoda is the Hall of Great Vows, which is a shrine honoring Bodhisattva Ti Tsang (Ksitigarbha, the Saviour of the Lost Souls). Venerable Poon Teong continued the work of Venerable Beow Lean with great dedication and devotion. Under the leadership of this second Chief Abbot(1906 to 1938), the monastery was further expanded and the teaching of Buddhism was extended to include Buddhist understanding and practices that help achieve world peace and joy.

The third Chief Abbot of Kek Lok Si was Venerable Yuan Ying, who succeed Venerable Poon Teong in 1938. Venerable Yuan Ying continued the work of building the temple and died in 1953. Kek Lok Si then went through a difficult period and faced problems especially in getting a chief abbot from China, as China was then undergoing political and cultural changes. It was not until 1968 that the fourth chief abbot, Venerable Pai Sheng from Taiwan, was appointed as the head priest of Kek Lok Si. Venerable Pai Sheng was well trained in the preaching of the Dharma and using his profound intellect, wrote many many books illustrating the Doctrine. Venerable Tat Neng, the fifth Chief Abbot, who served for eight years, from 1990-1997, succeeded venerable Pai Sheng. The last decade(1990-2000) has brought in many important changes and development to the historic Kek Lok Si temple complex. New buildings have been added whilst old buildings. have been renovated or rebuilt, characterizing the decade as a period of rapid outstanding growth. The temple’s six Chief Abbot, Venerable Jit Heng made history in December 2002 when he was the first Malaysian officially appointed as the head priest of Kek Lok Si. Venerable Jit Heng has made significant contributions to Kek Lok Si over the past two decades. His contribution is evident in the completion of the Majestic Statue of Kuan Yin, the Guan Tong Grand Hall and other new developments in Kek Lok Si.

Kek Lok Si is known not only for the beauty of its historic buildings, which attract thousands of tourists every year, but also for being a center for Chinese culture and Buddhist teaching. The dissemination of Buddhism through organized events and special occasions has benefited many devotees and followers of the Buddhist way of life. It is hoped that further dissemination of Buddhist knowledge will be conducted in Kek Lok Si, a center par excellence in Buddhist education, bring about better understanding and practices of Buddhist teachings to help create a more harmonious world.